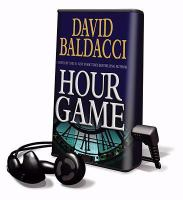 General Note
Title from Playaway label.
General Note
Issued on Playaway, a dedicated audio media player, manufactured by Findaway World, LLC.
General Note
Identical recording re-released by Findaway with different ISBN.
General Note
Accompanying material may vary.
General Note
One set of earphones and one AAA battery required for playback.
Participants/Performers
Read by Scott Brick.
Description
A series of brutal murders darkens the Wrightsburg, Virginia countryside. The killer, replicating notorious murders of the past, seeks to improve them, while taunting the police by leaving watches on the victims set to the hour corresponding with their position on his hit list. When Sean King and Michelle Maxwell are called to join the case, they are already investigating a crime involving an aristocratic and dysfunctional Southern family. But, as they soon discover, the two cases may be connected. The tension is further increased by a second killer who is copying the crimes of the first. King and Maxwell must discover their identities before the body count increases even more.
System Details
Playaway Digital Audio.
Local note
PLAYAWAY