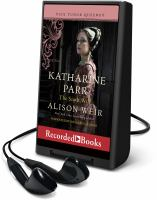 General Note
Release date supplied by publisher.
General Note
Issued on Playaway, a dedicated audio media player.
General Note
One set of earphones and one AAA battery required for listening.
Participants/Performers
Read by Rosalyn Landor.
Description
"Having sent his much-beloved but deceitful young wife Katheryn Howard to her beheading, King Henry fixes his lonely eyes on a more mature woman, thirty-year-old, twice-widowed Katharine Parr. She, however, is in love with Sir Thomas Seymour, brother to the late Queen Jane. Aware of his rival, Henry sends him abroad, leaving Katharine no choice but to become his sixth Queen in 1543. Fearing that she is unlikely to bear the King a child, Katharine gladly mothers his three children, Mary, Elizabeth, and the longed-for male heir, Edward. Four years into the marriage, Henry dies, leaving England's throne to nine-year-old Edward--a puppet in the hands of ruthlessly ambitious royal councilors--and Katharine's life takes a more complicated turn. Thrilled at this renewed opportunity to wed her first love, she doesn't realize that Sir Thomas now sees her as a mere stepping stone to power and riches, his eye actually set on bedding and wedding fourteen-year-old Elizabeth. The young princess is innocently flattered by his attentions, but then he persistently invades her bedchamber, to the shock of her household. The result is a tangled tale of love and a struggle for power, bringing to a close the dramatic and violent story of Henry VIII's six wives."--,Provided by publisher.
Local note
PLAYAWAY