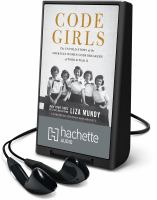 General Note
Title from Playaway label.
General Note
Release date supplied by publisher.
General Note
Issued on Playaway, a dedicated audio media player.
General Note
Originally released by Hachette Audio ℗2017.
General Note
One set of earphones and one AAA battery required for listening.
Participants/Performers
Read by Erin Bennett.
Description
"Recruited from small Southern towns and posh New England colleges, 10,000 American women served the U.S. Army and Navy as code breakers during World War II. While their brothers and husbands took up arms, these women moved to Washington and, under strict vows of secrecy, learned the meticulous work of breaking German and Japanese military codes. Poring over reams of encrypted messages, the women worked tirelessly in makeshift facilities in Washington, D.C.; Arlington, Virginia; and Dayton, Ohio. Their codebreaking triumphs shortened the war, saved countless lives, and gave them access to careers previously denied to them. In the process, many got their first taste of the big city, made lifelong friends, and fell in and out of love amid the heartbreak of war. Ordered never to reveal the details of their wartime work, these women were all but written out of history. Now, through her dazzling archival research and interviews with surviving code breakers, Liza Mundy has brought to life this vital story of American courage, service, and science. At the heart of Code Girls is Dot Braden, a feisty Virginia schoolteacher who, in 1943, leapt at the chance to take a mysterious job with the Army at a place called Arlington Hall"--From container cover.
Local note
PLAYAWAY