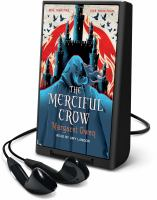 General Note
Title from Playaway label.
General Note
"HD."
General Note
"LIGHT."
General Note
Originally published by Macmillan Audio ℗2019
General Note
Release date supplied by publisher.
General Note
Issued on Playaway, a dedicated audio media player.
General Note
One set of earphones and one AAA battery required for listening.
General Note
"Give them fire. Give them fear"--Container jacket.
Participants/Performers
Performed by Amy Landon.
Description
Fie, a sixteen-year-old chieftain from a lowly cast of mercy-killers, must rely on her wits and bone magic to smuggle the crown prince of Sabor to safety.
Description
"A future chieftain. A fugitive prince. A too-cunning bodyguard. And one grumpy gray tabby. Fie abides by one rule: look after your own. As the future chieftain of a shunned caste of mercy-killers, she relies on her wits and bone magic--drawn from the teeth of dead witches--to protector her band. The Crows take more abuse than coin, so when they're called to collected the royal dead, Fie hopes they'll find the payout of a lifetime. When Fie discovers that Crown Prince Jasimir and his crafty bodyguard, Tavin, have faked their deaths to escape the ruthless Queen Rhusana, she's ready to cut her losses--and perhaps their throats. but Jas offers a deal that she can't refuse: make sure he lives to see the throne, and he'll protect the Crows when he reigns. To outrun and outwit the queen, the trio forge an uneasy alliance that i soon tested by old secrets, shifting allegiances, and forbidden feelings. As Rhusana and her band of deadly trackers loom ever closer, the three fugitives must discover what they're each willing to sacrifice to save their own"--Container jacket.
Local note
PLAYAWAY