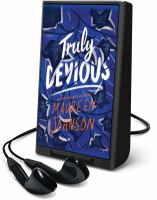 General Note
One set of earphones and one AAA battery required for listening.
General Note
Title from Playaway label.
General Note
"HDAUDIO."
General Note
"LIGHT."
General Note
Previously released by Harper Audio, ℗2018.
General Note
Issued on Playaway, a dedicated audio media player.
Participants/Performers
Narrated by Kate Rudd.
Description
"Ellingham Academy is a famous private school in Vermont. It was founded by Albert Ellingham, an early twentieth century tycoon, who wanted to make a wonderful place full of riddles, twisting pathways, and gardens. "A place," he said, "where learning is a game." In 1936, shortly after the school opened, Ellingham's wife and daughter, Iris and Alice, were kidnapped. The only real clue was a mocking riddle listing methods of murder, signed with the frightening pseudonym "Truly, Devious." It became one of the great crimes of American history. Something like that could never happen again, of course ... Years later, true-crime aficionado Stevie Bell is set to begin her first year at Ellingham Academy, and she has an ambitious plan: She will solve this cold case. That is, she will solve the case when she gets a grip on her demanding new school life and her housemates: the inventor, the novelist, the actor, the artist, and the jokester. But something strange is happening. Truly Devious makes a surprise return, and death revisits Ellingham Academy. The past has crawled out of its grave. Someone has gotten away with murder"--Container cover.
Local note
PLAYAWAY