The cabin at the end of the world : a novel
(Pre-loaded Audio) 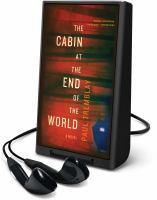 General Note
Title from container.
General Note
"HD Light."
General Note
Previously released by HarperCollins Publishers, ℗2018.
General Note
Issued on Playaway, a dedicated audio media player.
General Note
One set of earphones and one AAA battery required for listening.
Participants/Performers
Read by Amy Landon.
Description
"Seven-year-old Wen and her parents, Eric and Andrew, are vacationing at a remote cabin on a quiet lake in northern New Hampshire. A handful of miles from the Canadian border, far removed from the bustle of city life, cut off from the urgent hum of cell phones and from the internet, they are more than two miles away from their closest neighbors in either direction along an old dirt logging road. On a cloudless summer day, as Wen catches grass-hoppers in the front yard, a stranger unexpectedly appears. Leonard is the largest man Wen has ever seen, but he is young -- twenty-four and a half years old, he tells her -- and friendly, with a warm and wide smile that wins her over almost instantly. Leonard and Wen continue to talk and play, until three more strangers, two women and a man, all dressed like Leonard in jeans and button-down shirts, come down the road carrying strange, menacing objects. In a panic, Wen tells Leonard that she must go back inside the cabin. But before she goes, her new friend tells her, "None of what's going to happen is your fault. You haven't done anything wrong, but the three of you will have to make some tough decisions. I wish with all my broken heart you didn't have to." As Wen sprints away to warn her parents, Leonard calls out, "Your dads won't want to let us in, Wen. But they have to. We need your help to save the world. Please.""--,Provided by publisher.
System Details
Playaway Digital Audio.
Local note
PLAYAWAY

Tremblay, Paul and Amy, Landon. 2018. The Cabin At the End of the World: A Novel. Solon, Ohio: Findaway World, LLC.

Tremblay, Paul and Amy, Landon. The Cabin At the End of the World: A Novel Solon, Ohio: Findaway World, LLC, 2018.

Tremblay, Paul,, and Amy Landon. The Cabin At the End of the World: A Novel Unabridged., Findaway World, LLC, 2018.