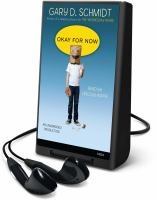 General Note
One set of earphones and one AAA battery required for playback.
General Note
Title from Playaway label.
General Note
Issued on Playaway, a dedicated audio media player.
General Note
Previously released by Random House, Inc., p2011.
General Note
"HDAUDIO."
General Note
"Listening Library"--Container.
General Note
Companion to The Wednesday wars.
Participants/Performers
Read by Lincoln Hoppe.
Description
As a fourteen-year-old who just moved to a new town, with no friends, an abusive father, and a louse for an older brother, Doug Swieteck has all the stats stacked against him until he finds an ally in Lil Spicer--a fiery young lady. Together, they find a safe haven in the local library, inspiration in learning about the plates of John James Audubon's birds, and a hilarious adventure on a Broadway stage.
Local note
PLAYAWAY