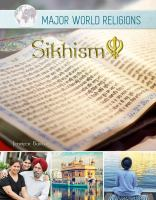 Bibliography
Includes bibliographical references (pages 105-106) and index.
Description
Sikhism originated in the Indian region known as Punjab during the fifteenth century. Sikhs follow the teachings of ten holy men, known as gurus, who lived between the years of 1469 and 1708. The gurus taught that all people were equal a concept that went against the dominant caste system of Hinduism, the major religion of India. Since the death of the last guru, Sikhs have continued to revere their teachings, some of which are recorded in a book of wisdom known as the Guru Granth Sahib. Today, there are approximately 23 million Sikhs in the world, making Sikhism the world s fifth-largest religion. More than 93 percent of all Sikhs live in or near the Indian subcontinent, while North America is home to the second-largest Sikh communities. The MAJOR WORLD RELIGIONS series provides information about six of the most important religious faiths practiced around the world. More than 75 percent of the world's population over 5.2 billion people observes the tenets of one of these six religions. Each book in the series describes the important beliefs of a particular religion, along with information about its history, practices, and rituals. Each title in this series includes color photos throughout, and back matter including: an index and further reading lists for books and internet resources, a timeline and organizations to contact. Key Icons appear throughout the books in this series in an effort to encourage library readers to build knowledge, gain awareness, explore possibilities and expand their viewpoints through our content rich non-fiction books. Key Icons in this series are as follows: Words to Understand are shown at the front of each chapter with definitions. These words are set in boldfaced type in that chapter, so that readers are able to reference back to the definitions--building their vocabulary and enhancing their reading comprehension. Sidebars are highlighted graphics with content rich material within that allows readers to build knowledge and broaden their perspectives by weaving together additional information to provide realistic and holistic perspectives. Educational Videos are offered in chapters through the use of a QR code, that, when scanned, takes the student to an online video showing a moment in history, a speech, or an instructional video. This gives the readers additional content to supplement the text. Text-Dependent Questions are placed at the end of each chapter. They challenge the reader s comprehension of the chapter they have just read, while sending the reader back to the text for more careful attention to the evidence presented there. Research Projects are provided at the end of each chapter as well and provide readers with suggestions for projects that encourage deeper research and analysis. And a Series Glossary of Key Terms is included in the back matter containing terminology used throughout the series. Words found here broaden the reader s knowledge and understanding of terms used in this field.