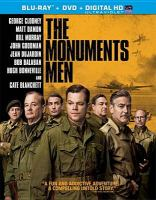 General Note
Title from container.
General Note
Based on the book by Robert M. Edsel with Bret Witter.
General Note
Originally released as a motion picture in 2014.
General Note
Special features: George Clooney's mission; marshalling the troops; deleted scenes; in their own words; a woman amongst the Monuments Men.
Participants/Performers
George Clooney, Matt Damon, Bill Murray, John Goodman, Jean Dujardin.
Description
An unlikely World War II platoon has been tasked by FDR with going into Germany to rescue artistic masterpieces from Nazi thieves and returning them to their rightful owners. With the art trapped behind enemy lines, and with the German army under orders to destroy everything as the Reich fell, how could they possibly succeed? But as the Monuments Men, as they were called, found themselves in a race against time, they would risk their lives to protect mankind's greatest achievements.
Target Audience
Rating: PG-13; for some images of war violence and historical smoking,CHV rating: PG.
System Details
Blu-ray, region A, widescreen (2.40:1) presentation; 5.1 DTS-HD MA (English), 5.1 Dolby digital (French), audio descriptive track, 1080p high definition; requires Blu-ray player.
Language
English or French dialogue; Spanish, English or French subtitles; subtitled for the deaf and hard of hearing; described video.
Local note
BLU-RAY