Anna of Kleve, The Princess in the Portrait
(eAudiobook) 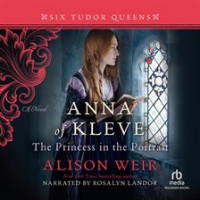