Diamond Doris: The True Story of the World's Most Notorious Jewel Thief
(eAudiobook) 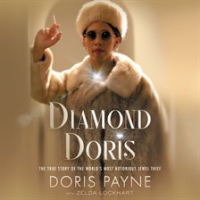