Black Klansman: Race, Hate, and the Undercover Investigation of a Lifetime
(eAudiobook) 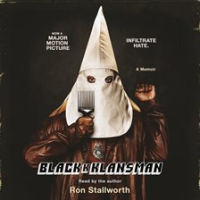