Pretty Jane and the Viper of Kidbrooke Lane: A True Story of Victorian Law and Disorder
(eAudiobook) 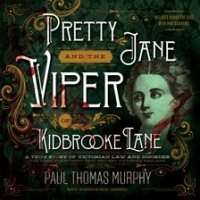