CRACK99: The Takedown of a $100 Million Chinese Software Pirate
(eAudiobook) 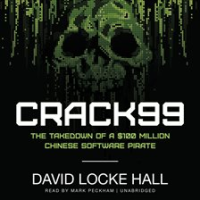